The positive dynamics of the first half of the day in cryptocurrency market moved in a sharp jump in the exchange rate of bitcoin, which is half an hour has risen almost $200 and crossed the level of $8 500.

The last time at these levels the price of bitcoin was on March 26. At the time of publication, 1 BTC is worth $8 519, according to the interexchange rate CoinMarketCap.

Altcoins demonstrate an even more outstanding performance. Ripple and Bitcoin is Cash for the last day has risen by almost 20%. Followed by EOS, IOTA, Monero, which scored 10-15%. Ethereum, meanwhile, prepares to take the mark of $600.

Capitalization exceeded $375 billion to as Much all cryptocurrencies together was not worth since March 13.

Although the situation looks almost anecdotal, but in recent days, the cryptocurrency market is really fulfilling the prophecy analyst Tom Lee, who recommended investors to wait until the end of the tax period in the United States.

The website ValueWalk April 19 published an article titled “the Most important for cryptocurrency only indicator that was bullish.”

In his article ValueWalk writes that with the development of cryptocurrency market to it become applicable indicators traditionally used by investors in other markets.

One of such indicators are the modes of “risk on” and “risk off”. Investors either want to take the risk and invest in riskier assets such as stocks of technology companies, or do not want to invest in gold or US treasuries.

To demonstrate a change of investor sentiment, analysts suggest taking a look at the schedule ETH/BTC. According to them, bitcoin is in the view of investors is a more reliable asset, and therefore, the concentration of Fiat can talk about their unwillingness to take risks. In addition, bitcoin has the most developed infrastructure for the exchange for Fiat, so its growth rate relative to altcoins suggests that investors may not be ready to the long term injections. At the same time, Ethereum is a representative group of digital assets with a higher degree of risk. 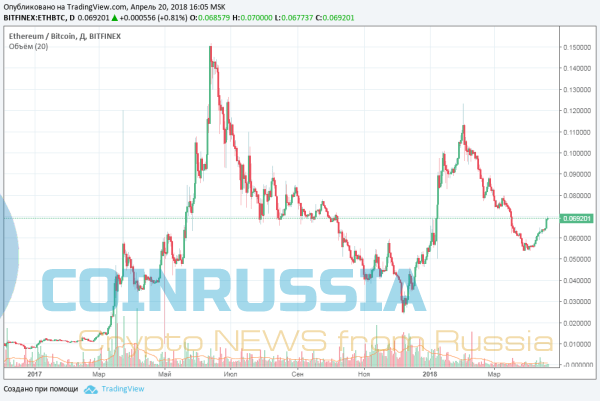 Following a significant rise ETH/BTC began in December 2017 at the level of 0,024 and reached a peak by 0.12 in February. This same period saw an increase in market capitalization from $300 billion to a historic high of $800 billion.

Then spread ETH/BTC has narrowed significantly, and the capitalization fell. However, both measures began to rise a few weeks ago. Spread ETH/BTC recently increased by 20% to 0,053 0,063, and market capitalization rose by 40% from $250 billion to $330 billion.”

This, the analysts conclude that growth regarding bitcoin Ethereum can serve as an indicator of the willingness of investors to take risks and at the same time a harbinger of the establishment of positive dynamics in the segment of the cryptocurrency.